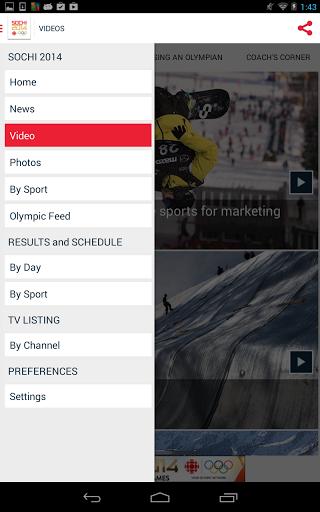 CBC Olympics Description: The CBC Olympics app provides you with full, wide-ranging, dynamic and real-time coverage of the Sochi Winter Olympic Games, including live streaming of all Olympic competitions.

It is available in English and French. The displayed version corresponds to the language that you have selected in your device settings. The app will feature the following:

• All events streamed live in their entirety and in real time with enhanced stats. Events available as video on demand afterwards• Simulcast of 20 daily hours of CBC Television Olympic programming• On-demand video highlights, news, analysis, blogs• Results, medal count and Canadian athletes’ performances in real time• CBC Olympic Feed will keep users up to date on social media, the latest news and links to the content you need to see, when you need to see it. Athletes and journalists provide live commentary and unprecedented social media coverage from Sochi• A detailed event schedule and programming guide for CBC, the official broadcaster of the Sochi Olympic Games, as well as for the official sublicensees TSN and Sportsnet• A second screen experience where users can play along with the CBC Olympic Primetime program.