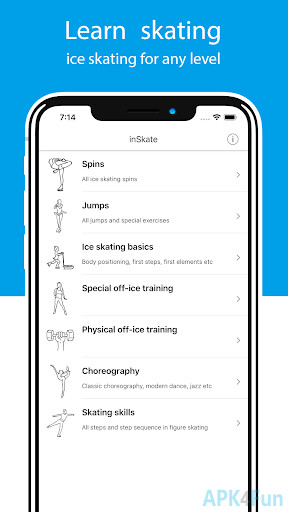 inSkate Description: «inSkate» is the first unique Mobile App to teach you how to figure skate. If you are a figure skating coach, an active skater, a parent or just a figure skating fan and want to improve your skating skills, find useful technical advice, learn some of the secrets from TOP level elite figure skaters, «InSkate» is ready to guide you towards your figure skating goals.

All our skating team is focused on your improvement in

Along with the on-ice training we are happy to offer you some off-ice preparation exercises. Our off-ice specialists are here to help you

-Improve your stamina and overall fitness
-Strengthen your body (legs, ankles, arms, back, abs, chest, shoulders)
-Improve your technical aspect (balance, coordination, rotation speed, jump height, landings) using specific equipment
-Work on your lines and extensions, stretching and positions using our ballet lessons. This part of training is essential for the quality of your performance.


We offer on ice video tutorials and workshops from World level elite figure skaters and coaches, including :


«inSkate» offers you a free three day trial. You'll have an access to over 150 videos with the detailed guidance and explanations.
If you like it, we are happy to offer you a monthly subscription.

Enjoy your athletic journey with us at your own pace.
We are wishing you luck and success!

Remember: There is No competition. It's just YOU vs YOU.