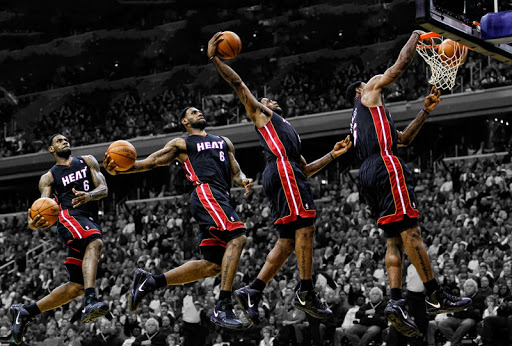 Lebron James Wallpapers Description: Thanks for trying my app Lebron James Wallpapers.You'll really love this wallpaper, because I've created it for free with just a small ads. You can install it on Samsung, including Nexus, Note, S2, S3 and S series, as a Live Wallpaper. You can install it on Motorola, LG and HTC phones as well.Here is how you can start using it: "Home screen" -> Open App -> Select Wallpaper -> Press Set Picture as Wallpaper On the topIf you like Wallpaper, please leave a comment and check out our other free apps.

James played high school basketball at St. Vincent–St. Mary High School in his hometown of Akron, Ohio, where he was highly promoted in the national media as a future NBA superstar. After graduating, he was selected with the first overall pick in the 2003 NBA Draft by the Cavaliers. James led Cleveland to the franchise's first Finals appearance in 2007, losing to the San Antonio Spurs in a sweep. In 2010, he left the Cavaliers for the Heat in a highly publicized free agency period. In his first season in Miami, the Heat reached the Finals but lost to the Dallas Mavericks. James won his first championship in 2012 when Miami defeated the Oklahoma City Thunder, earning the Finals MVP Award for his play. In 2013, the Heat won their second consecutive title and he repeated as Finals MVP. His career achievements and leadership role during Miami's 2012 and 2013 championship runs have led many basketball analysts to consider him the best player in the NBA today.

Off the court, James has accumulated considerable wealth and fame as a result of numerous endorsement contracts. His public life has been the subject of much scrutiny, and he has been ranked as one of America's most popular, disliked, and influential athletes. He has also been featured in books, documentaries, and television commercials, and has hosted the ESPY Awards and Saturday Night Live.