Beyblade Videos- All Episodes 1 for Android

Beyblade Videos- All Episodes for Android 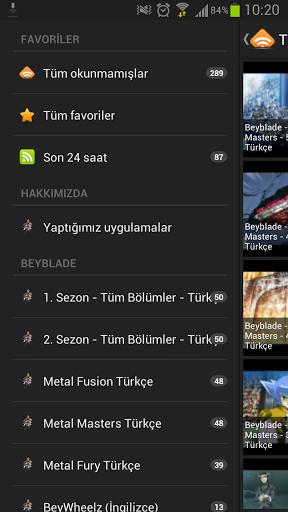 Beyblade, known in Japan as Explosive Shoot Beyblade (爆転シュートベイブレード Bakuten Shūto Beiburēdo?), is a Japanese manga series written and illustrated by Takao Aoki in order to promote sales of spinning tops called "Beyblades". Originally serialized in CoroCoro Comic from January, 2000 to December, 2003, the individual chapters were collected and published in 14 tankōbon by Shogakukan. The series focuses on a group of kids who form teams with which they battle one another using Beyblades.

The manga is licensed for English language release in North America by Viz Media. An anime adaptation, also titled Beyblade and spanning 51 episodes, aired in Japan on TV Tokyo from January 8, 2001 to December 24, 2001. The second, Beyblade V-Force, ran for another 51 episodes from January 7, 2002 until December 30, 2002. Beyblade G-Revolution, the third and final adaptation, also spanned 52 episodes (the last two episodes were released together as a double-length special in Japan) and aired from January 6, 2003, until its conclusion on December 29, 2003. Nelvana licensed the anime for an English-language release. Takara Tomy also developed the Beyblade toy line.

A young boy named Tyson (Takao Kinomiya) enters the Japan Regional Beyblade Qualifying Tournament. Tyson encounters Ray Kon (Rei Kon) and Kai Hiwatari, and after defeating them, they organize a team, known as the Bladebreakers, along with Max Tate (Max Mizuhara). The Bladebreakers tour China to register for the championships, while confronting the White Tigers, Ray's former team. It is seen that Ray's old team holds a grudge against him for leaving them, but towards the end of the Chinese Tournament, Ray and his ex-teammates make amends, and the Bladebreakers win the tournament. After this, Tyson and his friends arrive in the United States to fight the All Starz, who are coached by Max's mother. After winning the American league, the team find themselves stranded in Europe. In order to get to Russia to register for the World Championships, they must battle the Majestics who are Europe's top bladers. Once in Russia, Tyson and his friends find themselves up against the Demolition Boys, the Russian Champions, who are ruthless and obsessed with power. The Bladebreakers then discover that the Demolition Boys are merely tools for the BIOVOLT Corporation, run by Kai's grandfather, Voltaire and Boris, a criminal mastermind. Initially, Kai was pursued by Boris to join the Demolition Boys in the ultimate quest for power, the Black Dranzer Bit-Beast which Kai was seeking to become the best Beyblader. However, he realizes his mistakes and rejoins the Bladebreakers. During the finals, Kai loses the first round and his Dranzer to Spencer and his bit-beast Seaborg. Ray barely manages to win against Bryan, but has to be taken to hospital after the injuries from the match. Tyson manages to defeat Tala, the leader of the Demolition Boys whose body had been modified by Boris to win the match, in the final round and manages to win the title of the BBA world champion.