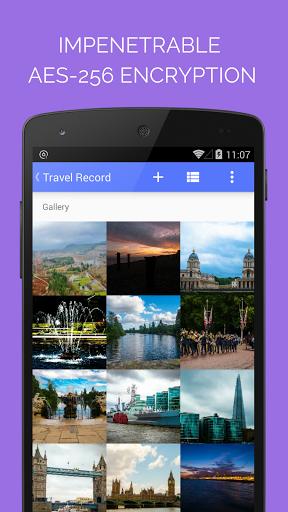 Secrecy helps you encrypts and hides your important private files. We only have one mission statement: delivering privacy at the touch.
(This is still alpha stage, but stable and needs your testing! :) )

Features
- Elegant and clean Android L look
- ENCRYPTS every file with AES256
- hides all file types
- Leaves no trace of any temporary files in the system
- Custom hidden vault location
- Import from other apps, Batch import.

IMPORTANT!
Internet permission is for a software analytics app called "crashlytics". We do not ever send any hidden files or personal information elsewhere.
Incoming call permission is for stealth mode: User dials a number to launch the app.
If you still have concerns, feel free to send us an email. We will be more than happy to explain.

I am starting this project since I have tried a number of Apps for encrypted hidden file storage, while not finding one that best suits my expectations:
- some do not encrypt videos securely and just stores the un-encrypted file
- most only support hiding pictures and videos. I occasionally want to encrypt word documents but can't find a way.
- some produced by major software companies are simply bloated and litters temp files everywhere... That's just as insecure as not using them.

I am aiming to produce an all-rounded one that maximizes security but still ensuring easy hiding and quick encryption time.