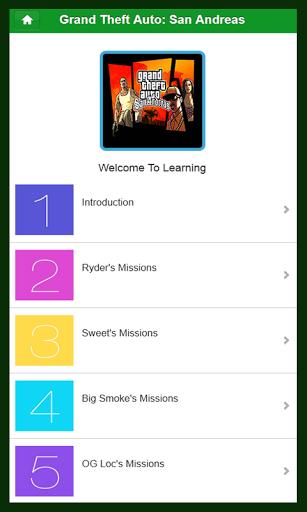 Grand Theft Auto Andreas Guide Description: Grand Theft Auto: San Andreas is the third title in the GTA III trilogy. First released on the PlayStation 2 in October 2004, and later ported to the Xbox and Windows, San Andreas was a marked success across all platforms. Unlike Liberty City that players explored in GTA III, and the Vice City of the eponymous sequel, San Andreas is an entire state, comprised of three cities: Los Santos, which is based on Los Angeles; San Fierro, which is based on San Fransisco; and Las Venturas, which is based on Las Vegas. Aside from the three cities there is also the expansive backlands of San Andreas, making for a tremendously large mass of land to explore.

Set in the early 90s, you take on the role of Carl “CJ” Johnson. After a long stay in Liberty City, CJ returns to his home in Los Santos, San Andreas after learning of his mother’s murder. The streets of Los Santos are rampant with gang violence, corruption, and drug trafficking, and CJ’s friends and family are in turmoil. It’s up to CJ to investigate his mother’s murder, reunite the family, and take back the streets of Los Santos.

This guide contains strategies for each and every mission in the game. There are also maps showing the locations of the Tags in Los Santos, the Photo Ops in San Fierro, the Horseshoes in Las Venturas and the Oysters in the waters of San Andreas. You’ll also find a list of what is needed to attain 100% completion.

Note -- This walkthrough was written based on the PS2 version of San Andreas, but the strategies contained within still apply to the other versions of the game. In an effort to make this guide apply to all versions of the game, the controls are referred to by their function. Refer to the instruction manual that came with your copy of the game for the buttons that these labels refer to.