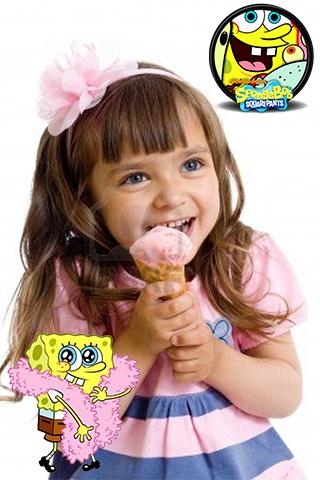 Spongebob Camera Description: SpongeBob SquarePants (often referred to simply as SpongeBob) is an American animated television series, created by marine biologist and animator Stephen Hillenburg. The series chronicles the adventures and endeavors of the title character and his various friends in the fictional underwater city of Bikini Bottom. The series' popularity has made it a media franchise, as well as Nickelodeon network's highest rated show, and the most distributed property of MTV Networks. The media franchise has generated $8 billion in merchandising revenue for Nickelodeon.

Many of the ideas for the series originated in an unpublished, educational comic book titled The Intertidal Zone, which Hillenburg created in 1984. He began developing SpongeBob SquarePants into a television series in 1996 upon the cancellation of Rocko's Modern Life, and turned to Tom Kenny, who had worked with him on that series, to voice the titular character. SpongeBob was originally to be named SpongeBoy, and the series was to be called SpongeBoy Ahoy!, but these were changed, as the name was already in use for a mop product.

The pilot episode first aired on Nickelodeon in the United States on May 1, 1999, following the television airing of the 1999 Kids' Choice Awards. The series received worldwide critical acclaim upon its premiere and gained enormous popularity by its second season. A feature film, The SpongeBob SquarePants Movie, was released in theaters on November 19, 2004, and a sequel is currently in development, with a projected release date of February 13, 2015. On July 21, 2012, the series was renewed and aired its ninth season, beginning with the episode "Extreme Spots".[2][3]

Despite its widespread popularity, the series has been involved in several public controversies, including one centered around speculation over SpongeBob's intended sexual orientation. The series has been nominated for 15 Emmy Awards, and won for Outstanding Special Class Animated Program in 2010. It has received several additional awards and nominations, including 16 Annie Award nominations (out of which it has won six times), and four BAFTA Children's Award nominations (out of which it has won twice). In 2011, a newly described species of mushroom, Spongiforma squarepantsii, was named after the cartoon's title character.