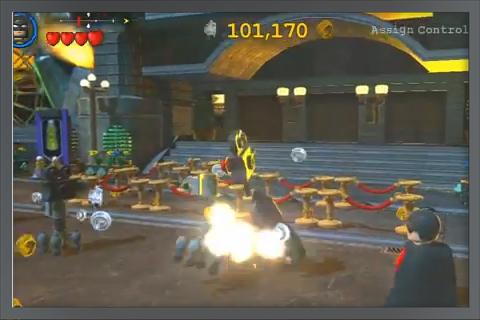 Video for LEGO Batman 2 DC Description: Welcome to 'Lego Batman 2 DC Super Heroes' unofficial video guide walkthrough & review for your Android device! :)Here you can: - View the official Metacritic review of the game;- View the best game walkthrough in YouTube to help you pass the difficult parts of the game;- Direct access to Amazon to buy the game online.

ATTENTION: - THIS IS NOT THE GAME!- YOU NEED TO HAVE THE YOUTUBE APP INSTALLED / UPDATED ON YOUR DEVICE!

NOTES: - This is an unofficial video game guide walkthrough of the game;- All content in this app is from Metacritic and YouTube;- We do not own 'Lego Batman' nor we are associated with it;- The copyrighted material in this app is allowed by the COPYRIGHT LAW: FAIR USE;- All trademarks, logos, and images are property of their respective and rightful owners;- Any content will be removed if asked by the legal owners.

I must admit, I've never been that into DC Comics. Sure, I love the Nolan-directed Batman movies and the animated Justice League show but when it comes to the actual characters, my heart belongs in the Marvel Universe. After spending some time with LEGO Batman 2, I must say I'm now more than interested in getting into DC's roster- it was awesome to see these familiar characters interact with each other in the LEGO world. There's just something too charming about the juxtaposition of a dark and brooding LEGO Batman with the ever so squeaky clean Superman. All in all, this game rocks.

Traveller's Tale has been known to not diverge too much from the standard LEGO gameplay. This changes with LEGO Batman 2: DC Super Heroes. For starters, it has voice acting (a first in a LEGO game) and it works incredibly well. Don't get me wrong- I was always a fan of the grunts and growls of the previous games but the voice work made the story that much more fun. I loved how Batman and Superman interacted and how Robin was constantly star-struck by the Man of Steel.

With LEGO Batman 2 I really felt engaged in the story. Unlike other LEGO games this one isn't based on a movie- which is awesome because it creates an actual original tale that piques your interest and keeps you wondering what will happen next. In the beginning of the game you'll just be playing as Batman and Robin but when Lex Luthor (voiced by the returning Clancy Brown) enters the picture you'll need back up. That's right, legendary heroes like Green Lantern, Wonder Woman and even Superman himself will help you. Though the main focus is Batman, so don't expect too much time with the other characters in the story.