Mexican Food (com.mobilenicheapps.mexicanfood): Mexican food is popular all over the world and for great reasons. There is such a variety when it comes to Mexican dishes. You can taste combinations ... Read More > or Download Now > 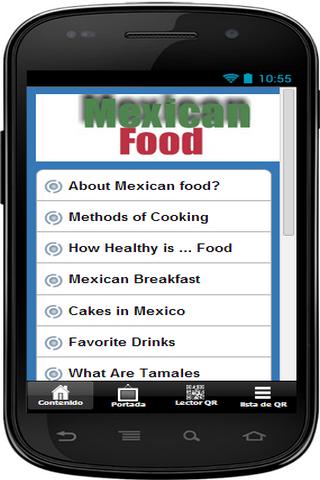 Mexican Food Description: Mexican food is popular all over the world and for great reasons. There is such a variety when it comes to Mexican dishes. You can taste combinations you never have before. Many people appreciate the great Mexican minds that created popular Mexican foods. The foods thrill our taste buds, the smells excite our minds, and the looks please our eyes and enrich and inspire our souls.

Many of the Mexican foods of today are based from long ago when the Aztecs and Mayas first created them. Some dishes that are exotic and eaten long ago include iguana, spider monkeys, and rattlesnakes. It is not eaten most of the time in this century, but it is also not unheard of. In addition the Mexican foods evolved when the Spanish colonists arrived. One ingredient that has not changed is the chili pepper. You may also find a bit of Caribbean influence in some Mexican dishes, especially in the Mexican states of Veracruz and the Yucatan. French influence can also be found in some Mexican dishes, one being bolillo. That is bread popular in Mexico that has a hint of French.

There are many health benefits when it comes to Mexican foods. They are rich in vitamins and minerals, with low fat and calories. You are not eating authentic Mexican food if you eat at Taco Bell. America has added many fats to the foods, which doesn't contain all the nutrients you would eat if you ate in Mexico. Mexican dishes contain many fresh ingredients that you may not be able to find in other types of cuisine. Tomatoes, peppers, onions and others are very healthy for your body.

Foods differ in the different regions of Mexico. It depends on the climate and geography of the area along with ethnic differences. Northern Mexico is known for its dishes that contain meat, while in Southern Mexico, dishes popular include vegetable and chicken. Sea-food is commonly served in the Mexican state of Veracruz. Veracruz is a Mexican state that is very long and tropical with lowlands that runs up and down the Gulf of Mexico. It is easy to get fish such as red snapper, snook, grouper, and mojarra. Mojarra is a prized fish in the area. Crab, lobsters, and oysters are abundant.

Besides the ocean, the state has more than 40 rivers that run through it. It has an endless supply of freshwater fish and shellfish. The food is prepared in a way that reflects unique dishes of the state. Seafood is very healthy for your body and can add a different taste to regular classic Mexican food dishes.