The Lego Movie 2014 for Android

More About The Lego Movie 2014 App 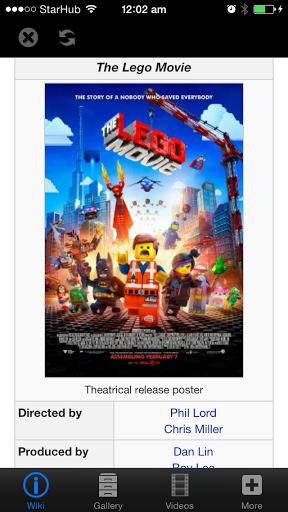 The Lego Movie is a computer animated film that is directed by Phil Lord and Chris Miller. It ia an adventure comedy starring Lego bricks, featuring the voices of Chris Pratt, Will Ferrell, Morgan Freeman and many others.

Plot: Emmet Brickowski, an ordinary construction worker with no special qualities, comes across a woman who is searching for something at Emmet's construction site. When he investigates, Emmet falls into a hole and finds the Piece of Resistance. Compelled to touch it, Emmet experiences vivid visions and passes out. He awakens elsewhere, with the Piece of Resistance attached to his back. Later, Emmet learns about Lord Business' plans to destroy the world....

This FREE mobile app includes- Information on the movie, plot and cast.- Trailers and videos of The Lego Movie, for both the movie and the game.- Movie wallpapers and posters of the movie cast.- Facebook and Official website link, so you can access the latest news of The Lego Movie film.

-------------DISCLAIMER: The content provided in The Lego Movie 2014 FREE mobile app is created using Feeds, Pictures and Videos, and are available in the public domain. This is not an official app, and is produced solely for entertainment purposes. We do not own any of the content. This app provides an organized way to browse, read contents and watch YouTube Videos.