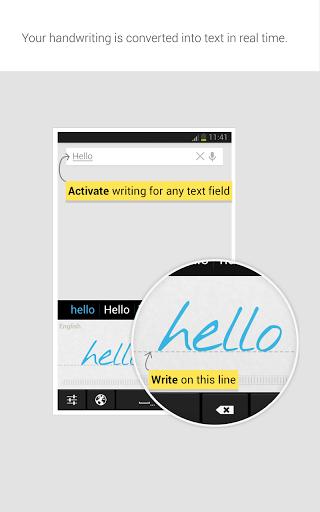 MyScript Stylus Description: Try out MyScript® Stylus™ Beta and let us know what you think on our Google+ page: http://goo.gl/ka0KgX

MyScript® Stylus™ Beta lets you handwrite your inputs on your phone or tablet. Our technology recognizes straight, cursive, scribbly writing - with or without a stylus.

Key features:
• Edit your text on the fly with gestures:
- Erase characters, words or sentences
- Create line breaks
- Create or remove spaces
- Overwrite characters to correct
• Horizontal continuous writing, to help you write without breaking your flow. This works in portrait or landscape mode.
• Works across your Android devices (tablets and phones).
• Integrated dictionaries to help you write with the correct spelling in 64 languages.
• Supports cursive English recognition and emoticons in Asian language modes (Chinese, Japanese and Korean).
• The user interface of the app itself supports 11 languages including:
Arabic, Chinese (Simplified), Chinese (Traditional), English, French, German, Italian, Japanese, Korean, Portuguese and Spanish.

Disclaimer:
During setup, Android displays a default privacy warning for all input applications. We would like to confirm that MyScript® Stylus™ Beta does not collect any of your data, credit cards or any other information.

Found a bug? Report it at https://support.myscript.com/