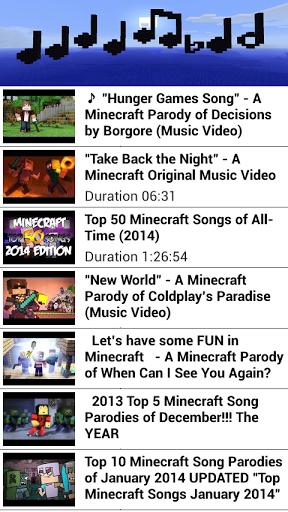 You'll need an internet connection to watch the videos in this app online.In this App used English language.

Minecraft is a sandbox indie game originally created by Swedish programmer Markus "Notch" Persson and later developed and published by Mojang. It was publicly released for the PC on May 17, 2009, as a developmental alpha version and, after gradual updates, was published as a full release version on November 18, 2011. A version for Android was released a month earlier on October 7, and an iOS version was released on November 17, 2011. On May 9, 2012, the game was released on Xbox 360 as an Xbox Live Arcade game, co-developed by 4J Studios. All versions of Minecraft receive periodic updates.The creative and building aspects of Minecraft allow players to build constructions out of textured cubes in a 3D procedurally generated world. Other activities in the game include exploration, gathering resources, crafting, and combat. Gameplay in its commercial release has two principal modes: survival, which requires players to acquire resources and maintain their health and hunger; and creative, where players have an unlimited supply of resources, the ability to fly, and no health or hunger. A third gameplay mode named hardcore is the same as survival, differing only in difficulty; it is set to hardest setting and respawning is disabled, forcing players to delete their worlds upon death.