ScoreCenter LIVE- 2014 Brasil (com.wisetoto.global): Must-have App for Sports Fans!!Wondering about the results of the match last night? Frustrated that you can’t watch the game going on right now? ... Read More > or Download Now > 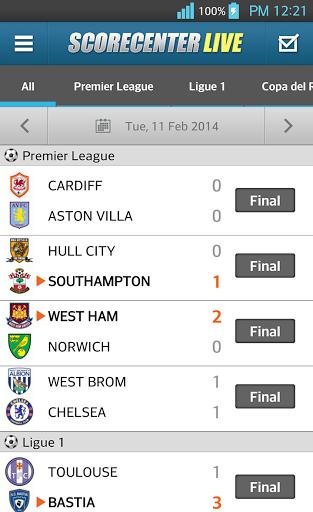 ScoreCenter LIVE- 2014 Brasil Description: Must-have App for Sports Fans!!Wondering about the results of the match last night? Frustrated that you can’t watch the game going on right now? You can now get live scores for the sports matches you want with ”ScoreCenter LIVE”. From the most popular sports leagues such as the EPL, Bundes Liga, MLB and NBA, to golf, tennis, and even Formula 1 (F1). Don’t miss out on ScoreCenter LIVE, the “all-in-one sports app” that supports over nine sports and more than 100 tournaments and leagues.

“All match information in real-time at a glance!’Click on the desired match on ScoreCenter LIVE to check the score of a current game or for past matches. You can not only check out the box score, but also the lineup, match history, match/broadcast schedule, and even team analyses, all at a glance.

1. “Detailed Records at a Glance!” Statistics Charts!”There’s more than just scores available at the Score Center!”Functions beefed up with new updates! Football records such as corners, fouls, offsides, and possession are available in a graph for easy viewing. Detailed records are also available for baseball, basketball, and other sports as well, so make sure that you don’t miss out.

2. Who’s playing and who’s on the reserves? Just ask Score Center!You no longer have to fret about not knowing if your favorite star players, like Lionel Messi (Barcelona) or Cristiano Ronaldo (Real Madrid), are playing and if they scored. You can easily check the lineup at Score Center. The app also offers player information from starting lineup, subs, scores, assists, yellow and red cards all at a simple glance.

If you find any inconveniences while using the services, then please let us know and we will try to address them.