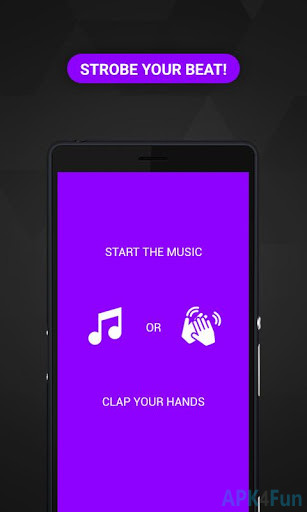 Music Strobe Description: Going to a festival with a band concert ticket? Get ready to the bright color screen and LED lazer strobe light show.

Use it as a pulsing flicker on the road while walking or driving a bicycle.

This is a strobe light free pulsing app for DJ. Rave disco party lights, LED and screen color flashing light effects sync with music beat and noises by a mic.

This is the free offline flash laser game for party events, concerts or festivals.

Turn on disco blinks in a house party or a concert and just dance in electro rhythm. Get attention to your sector on the stadium by loud noises and bright flickering torch lights.

If you are a dorm DJ: install stroboscope on every phone and tablet at the rave electronic dance house party in a dorm and play synchronized LED disco lights show!

It’s offline LED strobe lighting app, a free party game for a DJ. It needs camera and mic permission for stroboscopic rhythm light effects. It will turn on the cool color flashlight on voice or music beat. LED will not blink if you don’t have a torch in your camera. You can always use a hue screen flashlight in a nightclub or the house hip-hop dance party event.

Internal visualizer music light mode (paid) doesn’t use a microphone for catching the beat. It works on the most devices. Please contact me and get a refund if your device doesn’t support internal pulse mode.

How to make lights flash to music

1. Press START!
2. Turn on the music player or make funny noises to test color light effects
3. Set the mic sensitivity for current sound volume by swiping up and down (0-100)
4. Dance house, hip-hop or ballet with this party disco light music app!

LED and screen flashlight blinks when the sound volume peaks. This is the best for the loud noises on a street basketball sports match or a birthday's karaoke strobing lights show. Enjoy the party disco lights! Set different bright primary colors on the color circle wheel while partying in a night club.


Ask your fans to install Music Strobe on the band’s concerts tickets and rock the dance floor!

Make the music color flashlight show for kids birthday (be caution with the torch that uses blinding lazer LEDs). You can use Bluetooth speaker, but the app can turn on the flashlight on baby voice or screen taps. Dance hip-hop, rave, even ballet.

Take it to the match at soccer games and add a bit of flame in your sports life. Be noticed with the torch stroboscopic flickering pulses on the stadium during football games.


Thanks for your great reviews! It inspires me to make and develop cool party flashlights apps!
Ask to install Music Strobe on your band’s concerts tickets and make a video clip. Take a video from a dorm party and send it to me.
Share your film with me and get the promo code as a gift!


* Caution! Blinding bright LED strobe lights may be harmful to the eyesight, and for some people, it might cause epileptic seizures!