Supreme Heroes: Card RPG (air.com.ea.superherocity_na): *Anyone can be a hero.*THE CITY NEEDS HEROES. Create your own superhero and engage in strategic card-style battles against fearsome foes. Your ... Read More > or Download Now > 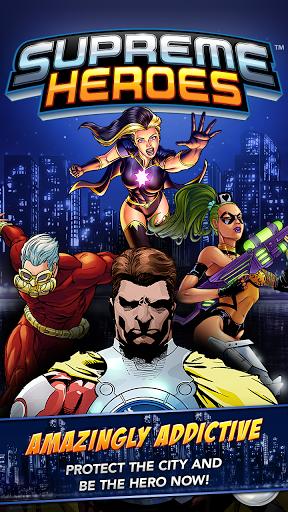 Supreme Heroes: Card RPG Description: *Anyone can be a hero.*

CREATE YOUR OWN SUPERHEROCustomize your unique avatar with 1,000 costume and gear options. Evolve abilities through collectible cards and equipment. Then, unleash your superhero to save the day!

BATTLE ONFace off against nefarious villains in epic showdowns of wit and might. Earn rewards to enhance your superhero’s powers. Clash with other players in weekly combat events to win prizes. Join leagues and fight against enemies worldwide.

FORGE YOUR LEGENDCarry out missions to protect the city. Vanquish villains to earn rewards and become a Paragon of Justice. Join Leagues and take up arms with friends and allies against enemies far and wide.

Create your superhero. Battle on. Forge your legend.

Download the most addictive superhero RPG on mobile now, for FREE!

"Think you’re truly supreme? Now’s your chance to prove it – once and for all – with the League Wars update.
• Be Supreme – Start a league with up to nine bruisers or join a battle-hardened crew. Search out worthy adversaries and challenge them to full-scale battles whenever, wherever.
• Wage War – Compete in regular, bracketed tournaments for high-powered prizes. Find out if you have what it takes to dominate for 4 full rounds.
Form a league of your own and battle others for supremacy now!