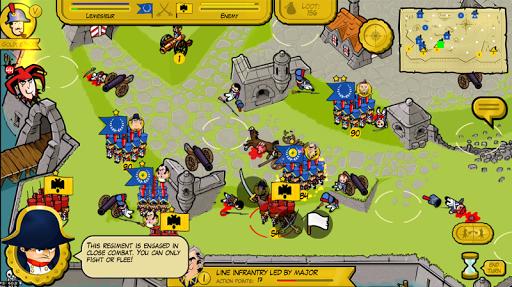 You will become Napoleon's or Wellington's general, who marches ahead to his greatest victory! Use your tactical skills to lead the brave regiments into battle!

Our game has built-in PvP and asynchronous multiplayer modes. You have to build your stronghold's garrison to protect your gold from other players' greed or challange them in realtime duels.

We hate diamonds, gems and time deficit. That is why we have no premium currency in our game. Just pure STRATEGY!

Players will be able to form alliances with different forms of government, beggining with Dictatorship, via Democracy and ending with FreePeople.

Brought to you by NowaHutaGames - very small, indie game studio from Poland.

Another solid update consists of:
*Guestplayers can play now without registration. The user ID is bound to the device's local storage memory. They are able to continue the game proress, but can't login from other devices.
Autologin feature
Couple of UI improvements towards better readability.
Serious BUG fixed, which crashed the app when creating PvP battle with *Guestplayers.