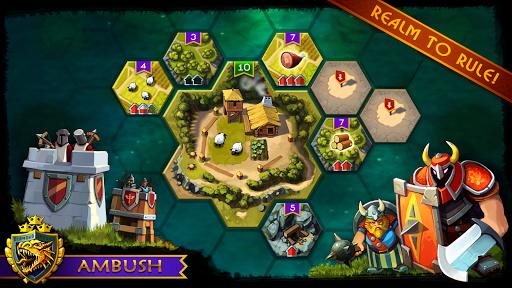 Ambush Description: Ever wondered what it's like to invade in a Tower Defense game? Join Ambush and overthrow other players' defenses! Keep the good old Defense as well to succeed in one of the best new games of the year!

For many years, Warlords of a mighty clan protected their land, building bases to defend territories and crushing enemies beyond count. But a Wise Man said: the time for Great Invasions has come! Build a Citadel, ambush the neighboring tribes! Send forth your armies and crush their defenses!

No other free games offer you the same ability to challenge other players in a unique mixture of well-known Tower Defense and BRAND NEW Tower Offense game modes! Command and conquer a realm of your own in one of the most addicting games on the market!

*** Your realm and neighborhood***
• Your own Citadel and many lands to conquer
• Ambush other player's realms and take their resources for victory
• Realm chronicles: know who attacked you and what was the outcome.
• Revenge is a dish best served cold! Strike back when you are ready!
• Evaluate other players' progress and power score

*** And basics ***
• 20 tower types and upgrades - a variety of damage types
• 20 battle units and monsters with different perks. Combine them wisely to pass through defenses
• 5 land types to protect and mine resources
• Research and power increasing buildings - 8 battle stats to boost your power!
• Two battle grounds – Native and Inferno

Improvements and bug fixes. Thank you for reporting the issues, we look closely to all bug reports!
“Shield” – protect your lands from assault.
“Last chance" option extend the battle when you need a little more time to win.