Published By POLYGAMe d i g i t a l 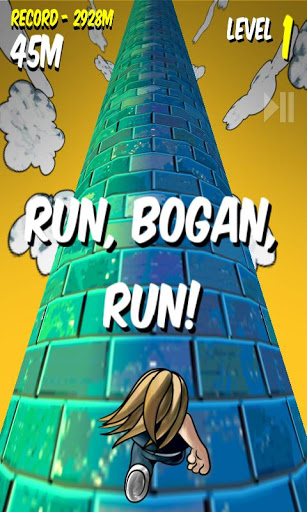 Bogan's Run Description: bogan, n. A creature commonly found in the western suburbs of Auckland, New Zealand and Sydney, Australia, though from time to time, they can accidentally wander into other regions, usually when in pursuit of members of the opposite sex or alcohol. Bogans are loud and obnoxious (particularly the female of the species) and dwell in run-down houses surrounded by rusty Australian V8 utes. The females are particularly fond of chewing gum and spitting it on the ground, sometimes causing sticky shoes, which on the feet of the right bogan, can be used for scaling walls. Bogans only listen to heavy rock music and are allergic to coloured fabric. Bogans generally never work for their income, instead preferring to rely on social welfare, though they can be coaxed into doing smaller jobs in return for a box of beer. Common bogan names for the males are Gazza, Dazza and Bazza, and all female bogan names almost exclusively begin with either "Sh" or "Ch", such as Sharon, Shona, Cheryl, Chantelle and Sharmishkabarwapooway.

Right, now you know what a bogan is, a bit about the game:

Gazza has sticky feet (thanks to his missus, Chardonnay) and he likes to run. Okay, he doesn't really, but a magical monkey named Geoff promised him a box of his favourite beer if he could reach the top of a mystical tower and return with the holy grundies of doom. Unfortunately for Gazza, the tower is endless, something that pesky monkey forgot to mention. It's up to you to keep Gazza alive for as long as you can! One slip-up and splat!

If you like pure, simple, pick up and play games such as Canabalt, or are just a fan of endless running games in general, you'll love this!

Thanks for choosing to play Bogan's Run, another POLYGAMe d i g i t a l original title for Android.