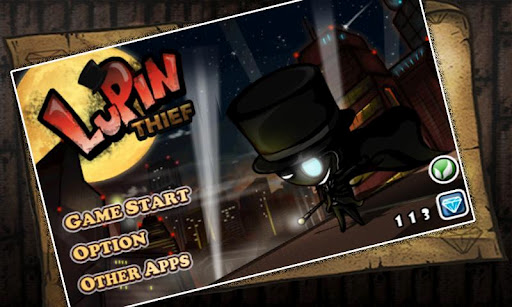 A wise person once said, ‘In life, the most fun you have involves the simplest of things!’ Check it out, a simple, beautiful and highly addictive one button game that tests the limits of your concentration and takes you on a fun ride you will never forget: Presenting, his awesomeness, Thief Lupin—the game!

Join Thief Lupin as he scales the Empire State Building, romps the Pyramids and conquers the Neuschwanstein castle… A simple one button game, Thief Lupin game challenges you with different kinds of traps and tickles you with witty puzzles as you try to take in the majestic settings of the game.

< Game Scenario >
- The King of Thieves Invitation
One fine day, a few of the world’s greatest thieves find themselves with an invitation that would practically land them on the throne! But first they have to win it.
- Only one mighty thief can sneak into the world’s most famous buildings with the top security measures and take the honor of the King of Thief. Are you the one?

< Game Play >
- Thief Lupin is simple one-button play game with touch screen controls.
- Thief Lupin has various behaviors for each floor and buildings, which lets him (the player) can sneak into the buildings with the appropriate touch control.