Aeronauts: Quake in the Sky 1.1 for Android

Aeronauts: Quake in the Sky (com.Aeronauts): Let your machinegun scream and guided missiles chase to blast away waves of incoming enemy fighters. Will it be you or your friend that takes the top ... Read More > or Download Now >

Aeronauts: Quake in the Sky for Android

More About Aeronauts: Quake in the Sky Game 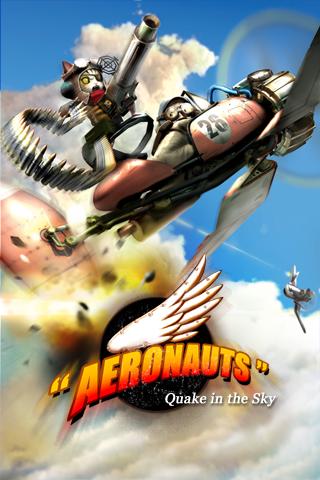 Aeronauts: Quake in the Sky Description: Let your machinegun scream and guided missiles chase to blast away waves of incoming enemy fighters. Will it be you or your friend that takes the top position in this classic style flight shooter specialized for the touch screen interface.

[Features]- CHALLENGE, your skills: Was level “Easy” too easy? Go for level “Hard” and the top of the leaderboards.- COMPETE, against friends: Nest, the ultimate social networking platform for smartphone games allows players to upload their score on the leaderboard, write messages on the board or send personal messages to each other.- CONTROL, the way you like it: Tilt to swerve away from enemies! or Drag your plane out from the swarms of enemy bullets! or Classic-style virtual joypad for the retro gamers, all ready for your taste!- ENJOY, at any time you like: Selectable stages for instant access to your favorite map!- SPECIAL WEAPON, not your average super bomb: Unique guided missiles launched from your fingertips.

[Story]With the help of Ultra-Vox, new generation of power engine created by genius scientist Dr. Stier, humanity has faced the aerial revolution era. Aero Castles are floating in the skies of Europe and ambitious teenagers are yearning the life of a fighter pilot. This has raised numbers of Flight Schools to be established and may pilots have been trained. One of the Flight Schools is Moulin de Ciel known to be the best of all times. You as a player of Aeronauts will become a cadet of Moulin de Ciel, fighting your way to become the best pilot ever.

[How to play]1. Select the plane (of your choice from Barracuda, Bluefin or Greyhound by scrolling left and right), then touch “Select”.2. Select the stage by scrolling left and right, then select the difficulty level and touch “Start” to begin the stage. You can only select Winter Palace at the beginning and other stages open depending on your progress.3. Move your plane with Tilt, Joypad or Touch, which ever you chose from the settings menu. Machines gun are fired automatically.4. Touch on the enemy to fire powerful guided missiles.5. Shoot down enemies, obtain items and defeat the boss to clear the mission.