Galactic Heroes (com.com2us.galacticheroes.normal.freefull.google.global.android.common): Fight for resources and conquer the universe in this thrilling Sci-Fi Strategy game, Galactic Heroes!★ Real-time battle for survival between the ... Read More > or Download Now > 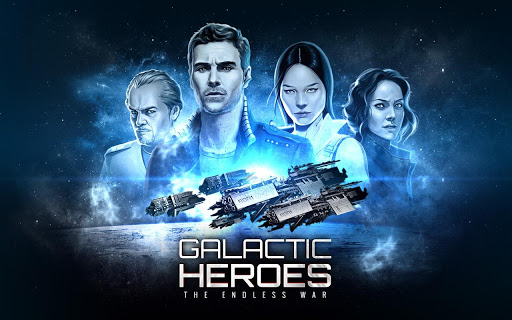 Experience the race for survival between the Federation of Empires and the Liberty Alliance as they clash to gain control over rare and essential minerals throughout the Universe.

This game is free to play, but you can choose to pay real money for extra items.

Numerous heroes, each with their own potentials and special skills are in search of a leader who can lead them with charisma and vision. Identify and develop the potentials of the legendary heroes and conquer the Universe.

Mix and match from numerous types of battle ships, weapons, and special devices to build your very own fleet. Then organize your fleet effectively to create the ultimate and undefeatable strategy.

★ Build a powerful nation that will rule the vast universe ★

With the help of the heroes, construct buildings and conquer planets to expand your empire. Conduct research to develop the new technologies to aid you in building the most powerful nation!

This game was created specifically for the one who will ultimately conquer and rule the universe, YOU! Let Galactic Heroes immerse you in the world of Sci-Fi with spectacular graphics and massive-scale battles.

The ultimate Sci-Fi strategy game, Galactic Heroes!
We've prepared a special Lunar New Year Event, so be sure to check it out!
Have feedback? Leave a review or drop us a line at info@com2us.com