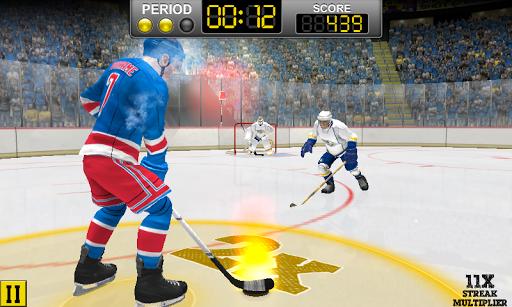 NHL Hockey Target Smash Description: Smash your way to the Stanley Cup® in a casual, fun, target shooting NHL hockey game! By shattering targets and achieving high scores you'll take down NHL opponents head-to-head as you play your way through multiple seasons. Along the way unlock an arsenal of pucks and sticks like The Reaper and the Frost Edge to dominate the competition. Snipe targets with a quick flick or blast through them with a powerful slap shot. Rack up points and bonuses to keep your goal streak alive over three periods. Create your own hockey legend playing for any of the 30 NHL teams. Dominate the league and lead your team to win the most coveted trophy in all of sports - the Stanley Cup®.

START OF THE NEW SEASON FEATURES:
Drop the puck and play hockey! A brand new season of the NHL is upon us and NHL Hockey Target Smash is ready with a brand new season of its own... complete with ice-shattering new features that will make the crowd go wild!

TEAM PLAY!
Team Play redefines the game and is the heart of the new NHL Hockey Target Smash new season.

Join your favorite team with the brand new, revolutionary "Team Play." Face off against other NHL teams in weekly seasons where every point counts.

Team Play provides a purpose for points. Join a team for the season and then every point you score in any regular season "ladder game" is added to the total points for that team.

At the end of each one-week season, players get prizes for just being on a winning team or the MVPs get awesome prizes for making it onto Team and NHL MVP lists.

Team Play is available starting at the 13th regular game of Season 1.

MORE BONUS GAMES!
In addition to Team Play, we also added to the lineup of our very popular Bonus Games. The team of Onslaught, Siege, and Hotshot are now joined on the ice by Bullseye, Bottle Bash, and Sharp Shot.

THE COACH!
Players are now walked through the first season and into the start of Team Play by the Coach and his (sometimes) gruff comments.

- All 30 NHL teams and 60 uniforms
- Endless season, playoffs, and the Stanley Cup Final® game modes
- Pick-up and play flick shooting controls
- Create your own character, choose a team, name, number, and more
- Keep you stick down and head up to shoot past goalies and defensemen
- Unlock custom sticks, pucks, and item bundles
- Google Quests, leaderboards and achievements

NHL, the NHL Shield and the word mark and image of the Stanley Cup are registered trademarks and Quest For The Cup is a trademark of the National Hockey League. All NHL logos and mark and NHL team logos and marks depicted herein are the property of the NHL and respective teams and may not be reproduced without the prior written consent of NHL Enterprises, L.P. © NHL 2015. All Rights Reserved.

The new season is underway! We resurfaced the ice and fixed some minor bugs. Thanks for your continued support and feedback. Game on!