Football with Patrick Willis 1.1.2 for Android

Football with Patrick Willis for Android 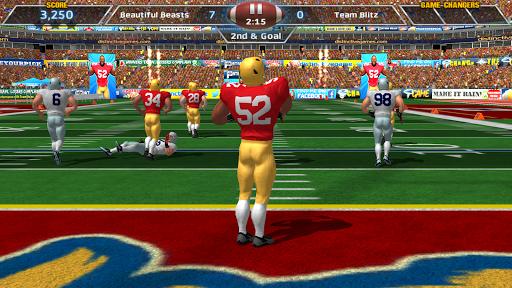 NO playbook, NO flags, NO penalties, just pure action, power and skill as you mow down your opponents in the adrenaline-fuelled race to the BOWL! Bring on the PAIN with over-the-top hits and tackles, impossible plays made possible and much more, as you try to dominate the gridiron.

Playing HARD gets you paid, son! Spend your hard-earned Willis bucks on new players, customizing and training the team or even unleashing the fury of Mother Nature on the unsuspecting fools on the opposing team. Friends turn foes, as you beat their records one by one leaving nothing but your blood, sweat and their tears on the field!

• Hustle like a champ with mind-blowing passes, runs and tackles bringing pure destruction from city to city all the way to the BOWL.

• Make it rain on new players, training your squad and equipping them with THE best Willis Bucks can buy!

• Seek ‘n destroy frenemies on your quest to rule the gridiron. Share that swagger on Facebook for extra rep.

100 extra stages for you to get your grind on.
Team customization with smokin' hot jerseys plus now you can name your players.
Performance & visual enhancements now this baby is all spick-and-span.
1000 extra cans o' whoopass