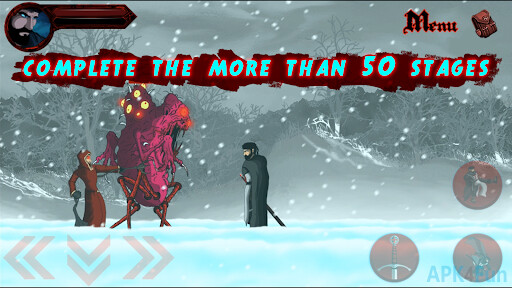 One of the Knights hack and slash 2D 90s platformer indie game.

Everyone killed by the Red Plague turns into a fearsome demon, and a mysterious army of mercenaries known as the "Knights of the Three Suns" are led by a psychopath, Knight Melendo, thus terrorizing the villages in search of witches under the orders of Torquemada the inquisitor.

Ruy, the last Templar Knight (also known as the demon hunter) will try to stop them simply by relying on his old magical templar sword.

-Epic 2d modern action platformer with bosses, hack and slash action and knight fights:
Templar 2 has a wide variety of enemies. Fight with all kinds of mercenaries and knights, to end up facing the most terrifying demons, and of course, the final bosses.

-Explore the medieval world map and choose your path, but beware, not all lands are suitable for knights with little equipment or level.

- Upgrade your warrior, buy better armor for your knight and magic items.

- Gamepad / Controller support, just activate it in the options.

- Secret rooms and magical doors in very secret corners waiting to be found.

-More than 50 levels and 40 pages of color comics so you don't lose any detail of this epic adventure platformer and action game.

-Improve your inventory by buying items in the store or finding them throughout the map. When fighting with the enemies, you have a chance that they will drop potions, magic items and the currency you need in the store, a classic in dark platform games and metroidvania.

I am a single developer, it may take a while to answer, but I will answer everyone as soon as possible.

You can write to studio2pastores@hotmail.com.