Battle Beach (com.ember.nationzSD): Form a powerful alliance and rebuild civilization one island at a time ... Read More > or Download Now >

Also Battle Beach is included in these Games collections: 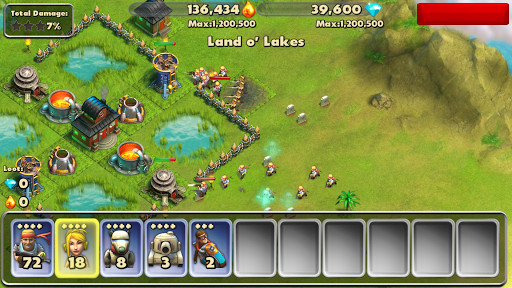 It is up to you and those like you to fight back the forces of chaos and help restore law and order to the world.

Form a powerful alliance and start rebuilding civilization one island at a time! Build your base, rally your troops, and engage in combat with thousands of other players online!

Battle Beach is an exciting combination of city building, tower defense, and fast-paced real time combat with other live opponents. Raise an unstoppable army of snipers, tanks, and mighty Exo-Suits. Forge an alliance with other players and rise through the ranks. Fend off the Marauder hordes and restore order to a world lost in chaos.

* Upgrade your base into an impenetrable beacon of hope.
* Battle other real players all over the world and take their Medals.
* Forge a powerful alliance with other players and rise up the global ranks
* Wage war against the Marauder Leader in an epic single player campaign.
* 10 unique units with multiple upgrade levels
* Defend your base with Machine Gun Nests, Sniper Towers, Mine Fields, and Walls.