Empire VS Orcs (com.ezjoynetwork.empirevsorcs): Use your wisdom to crush enemy tribes and destroy the den of Orcs ... Read More > or Download Now >

Empire VS Orcs for Android

More About Empire VS Orcs Game 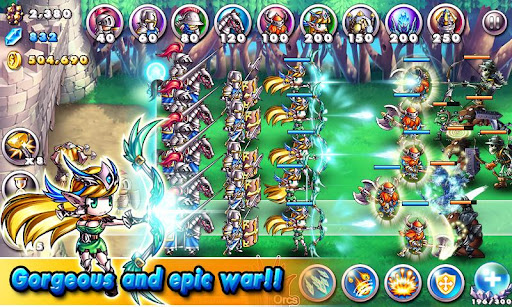 Empire VS Orcs Description: The war between the Empire and the Orcs is breaking out!

The Orcs are cursed by darkness. They attack brutally and fiercely, move fast and are almost indestructible!

It is predicted that a true warrior would lead the army to conquer the Orcs, and become the king of the virtual little empire!

Warrior, command your cavalry, infantry, archers and spearmen, use your wisdom to crush enemy tribes and destroy the den of Orcs!

Unlock new troops and upgrade their attributes to get more power-ups! Watch units transform as they level up!

1. Attack and Defend: as a Defender, you need to protect your castle; as an Attacker, send your army to destroy the Orcs' den;

2. Five offensive lines, so you can organize your soldiers in different formations and correspondingly the enemies will have coping strategy to send NPCs, which makes the game more interesting and challenging.

3. Plant gold mine and mana well to speed up creating armies and recovering your magic;

4. Wide variety of combat arms, such as footman, spearman, knight and archer, and each has their own skills and characteristics which can be upgraded. Correspondingly, the enemy also has variety of orcs, tigerish, strong, rapid and almost indestructible powerful boss. The key to victory is the good co-ordination.

5. Variety game modes frequently illustrated in different levels, so you will always keep a feeling of freshness.

6. Polished graphics and glorious magic effects. Highly valued details of the design. And you are the hero to lead this epic war!

☆ Reviews ☆
"What an awesome app!"
- Editor's Pick from AppEggs.com

We believe that everyone is a gamer at heart and that games are a great source of joy and relaxation. So Ezjoy always try to make the games easy and joy. For Empire VS Orcs, we want to make it one of the best strategy games on Android and your 5-star reviews keep us inspired and motivated.

Visit m.ezjoygame.com from your Android device to see the whole gamelist.

Enormous thanks to everyone for their playing, feedback, and support.

This update brings:
IAP upgrade v2 -> v3
Bug fixing
Enjoy it and thank you for supporting Empire VS Orcs.