Empire War: Age Of Heroes (com.feelingtouch.empirewar): Empire War: Age of Heroes, the new, massively multiplayer strategy game, is here! Prepare for a gaming experience like no other. Build your own ... Read More > or Download Now > 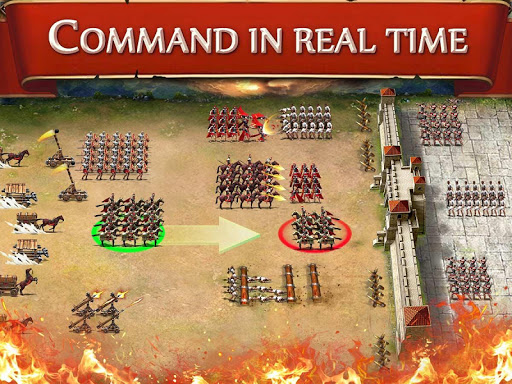 Empire War: Age Of Heroes Description: Empire War: Age of Heroes, the new, massively multiplayer strategy game, is here! Prepare for a gaming experience like no other.
Build your own empire and command huge armies in epic battles against your enemies. Conquer historical cities and recruit Legendary Heroes to help build an empire that will stand that test of time. Form powerful Alliances with players from all over the world and work together to achieve total domination.
Empire War: Age of Heroes combines long-term empire building with the excitement of real-time strategy.
Dispatch armies to plunder or occupy enemy cities and use cunning strategies to deceive your foes. Let the world know your name and defeat anyone who stands in your way on the path to glory!

Features:
✔ Command your troops during battle and strategize in real time.
✔ Conquer cities and expand your territory.
✔ Take control of historical cities and rule entire regions.
✔Recruit Heroes to transform your army into an unstoppable force.
✔Research advanced technologies that will help your empire prosper.
✔Use cunning strategies to gain an advantage over your enemies.
✔Train Legionaries, Archers, Armored Cavalry, Ballistae, Trebuchets and more.
✔Earn Nobility Ranks and climb the ladder of power.
✔Trade resources with merchants and other players.
✔Form powerful Alliances and battle hundreds of other players for supremacy.

Forge your own destiny in Empire War: Age of Heroes!

Version 1.205:
New Features:
1.Orders: County Cities and higher can now issue orders and administer other cities within their jurisdiction.
2.Power and Kill rankings have been added.
Modifications:
1.The level of Barracks required for Ballistae has been reduced to Level 8.
2.After using a Peace Card, your city will immediately become protected.
Bug Fixes:
A bug that meant returning troops and transport missions didn't receive boosts from Relay Stations has been fixed.