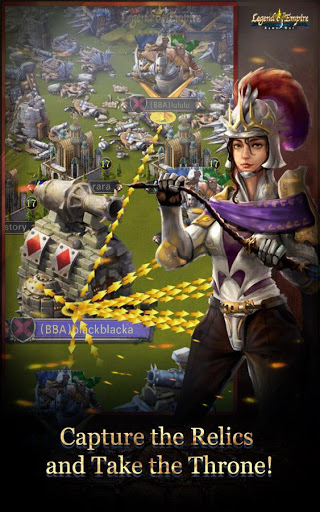 Legend of Empire - Relics War Description: Conquer the ancient realm, build your powerful empire, evoke the lost glory! Legend of Empire is a brilliant mixture of fast-paced strategy and tactical combat. Just PLAY FOR FREE in this addictive simulation and strategy MMO game!

BUILD YOUR EMPIRE
- Build and Customize your own mighty Empire.
- Train vast troops of Swordman, Assassin, Paladin & Mage.
- Upgrade Dwarf, Treant, and even Faerie Dragon to fortify your Empire!
- Raise a cruel army, plan attack to expand your territory.

STRENGTHEN YOUR POWER
- Wishing at Moon Well, Summon legendary ELF Heroes to fight with your people.
- Craft epic weapons & embed them with magical gems. Equip them to your Heroes!
- Rediscover the ancient wisdom, research technologies to make your Empire more powerful.

FORM POWERFUL FELLOWSHIP
- Play online and chat with people from all over the world.
- Create or Join an Alliance and battle together! Make friends, Chat, Help and Trade with each other in the Alliance.
- Forge diplomatic alliance. Pick out a Spy, defeat opposing force.
- Watch the animate Battle Report, arrange your troops, set an rally with your allies, and plan strategic battles in REAL-TIME.

Hold your crown, muster your armed troops, Holy War of Relics is starting! For the THRONE!!!

Please Note:
1. Legend of Empire is completely free to play, however some game items can also be purchased for real money.
2. Internet connection is required to play Legend of Empire.

If you have any problem or suggestion, please feel free to contact us via: support@fingerdance.com