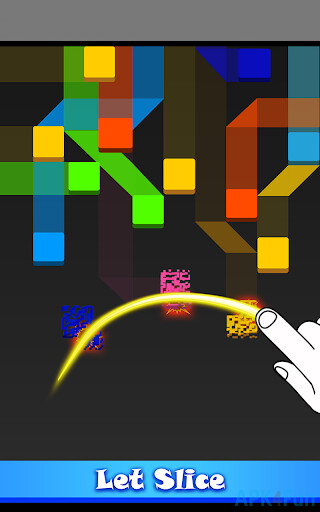 Game Io Ninja Description: Needs more new io games and ninja games with lots of action? Here is an awesome app for you: Game Io Ninja - Fun Slice. This is an ninja io game that tests your speed and brain reaction. You can download io game for mobile and play now. That offline io game is fun.
In this fun io game for players simply tap and slice with their fingers on the slither squares. If they reach the bottom line of the paper, io game is over. So, slice all the slither things and have pleasure by playing this fun io game! There has never been a better time to play Game Io Ninja - Fun Slice, so unsheathe your sword and get the control over the fun game play by slicing like being a ninja.

Features of Game Io Ninja - Fun Slice:
1 Funny 2d graphics with cool particle effects
2 Fun game with paper elements
3 Good io game sounds and addicting music
4 Really fun io game that don’t take up space on mobile
5 New ninja game play in a genre of the time killer apps
6 Fun game that don’t need wifi or internet required
7 Supports Android phones and tablets
8 Casual io game where you can play with friends
9 Rise up the reaction by playing this ninja io game
10 Simple one-touch easy-to-learn controls to slice io game slither things
11 Slice for a high score to be the best ninja ever, use special multi-slice bonus and multi-touch to maximize fun io game effect, and go crazy on slicing the mega box-boss. Not to slice enemy boxes as the io game will over.

In this Game Io Ninja - Fun Slice, players can be the best top io ninja game ever. The world of io game is fun and addicting! One of the fun io game of 2022 for all ages to test your reaction. Are you ready for our fun io game? If you like this fun ninja io game - share it with friends. Lets download Game Io Ninja! Game Io Ninja is waiting for you!
Copyrights Fun Games & Cool Games