A Space Shooter For Free 1.1.3 for Android

A Space Shooter For Free (com.frimastudio.android.SpaceShooter): Destroy aliens, upgrade your ship, and shoot'em up ... Read More > or Download Now >

A Space Shooter For Free for Android

Also A Space Shooter For Free is included in these Games collections:

• Games to Fight in Space

More About A Space Shooter For Free Game 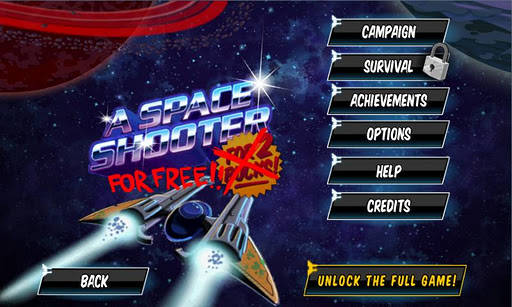 With more than 800,000 downloads across all platforms, A Space Shooter for Free continues to deliver endless fun and alien annihilation to its fans!

To celebrate the near-million-player mark, Commander P. Jefferson has decided to award you, for a limited time only, ONE MILLION remnants! Use this newfound wealth to pimp your ship, upgrade your cannons, and get your alien-killin’ on!

- ONE MILLION remnants giveaway, for a LIMITED TIME!

Embark on a hilarious journey through space as Commander P. Jefferson, an alien-hating starfighter at the helm of the mighty USS Eradicator.

The critically acclaimed Space Shooter franchise, with nearly one MILLION downloads across all platforms, is now available for FREE!

***For those craving an even more intense experience, a 99 cent in-game upgrade to the BIGASS version will let you enjoy a slew of additional boss fights, difficulty levels as well as devastating additional special weapons.***

A Space Shooter for Free players will:

- BATTLE hundreds of enemies across two galaxies.
- EXPERIENCE fast-paced, retro-gaming action with incredible detail.
- ENGAGE in epic boss fights that allow you to keep their special weapons once defeated.
- ENJOY two ways to play: A hilarious campaign-based story mode and a skill-testing survival mode.
- LAUGH at more than 25 minutes of fully voiced, hilarious cutscenes.
- VISIT Jenna’s shop to purchase more than 40 upgrades and power-ups or maybe just do some flirting…
- DOWNLOAD the full version, unlocking even more boss fights, difficulty levels and special weapons for a one-time 99 cents in-game purchase.

What the Critics say:

“A Space Shooter stands apart because of its high degree of polish and production values” - Appolicious
“Amazing! A solid arcade game with an old-school twist!” - IGN
“The value proposition is dynamite” - Touch Arcade
“In brief, this is totally awesome!” - ipadappcafe
“Explosions, machismo and explosions of machismo!” - 148apps
“9/10 It’s funny, it’s fun!” - brutalgamer.com
"A Space Shooter for free is a solid iOS game" - tuaw.com