War of Tanks: Clans for Android 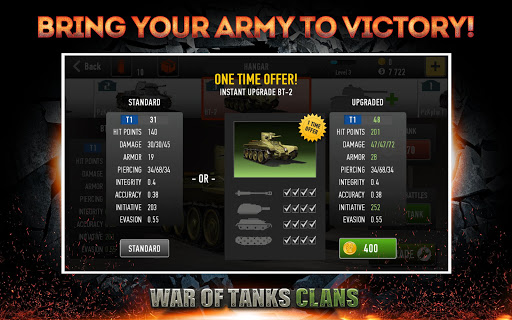 Take command of a war tanks brigade in a fierce battle on the front lines, with up to three tanks at once.
Players can choose from 5 different modes of play, with both single player options and play online games with friends.
Campaign – A sequence of eight campaigns, which go through all stages of WWII.
Quick Battle – A battle with other players online. Players can gain rating points and secure a spot on the leaderboards.
Raid – Players will have to win six battles in a row. If victorious, they can receive unique prizes, from new modifiers to blueprints of new tanks.
Operation – Players join a clan to fight other players. Overall success depends on the actions of all the players in the clan.
Clan Wars – PvP battle between clans where strategy is just as important as fighting prowess.

As players win more tank wars, they unlock 30 historical WW2 tanks, from the manoeuvrable Pzkpfw II Luchs, to the legendary heavy Churchill. Each tank is uniquely customizable, consisting of 4 separate modules (top turret, chassis, tank shell, and weapon) all which can be upgraded with 4 modifications.

War of Tanks is an easy to learn free games with specially designed for touch screen controls.