Tank Battles 1.1.4a for Android

Tank Battles (com.gameloft.android.ANMP.GloftTBHM): Get ready for Tank Battles! This is General McTankerson, the greatest tank commander in the world, speaking! Many have come to my island for the Tank ... Read More > or Download Now > 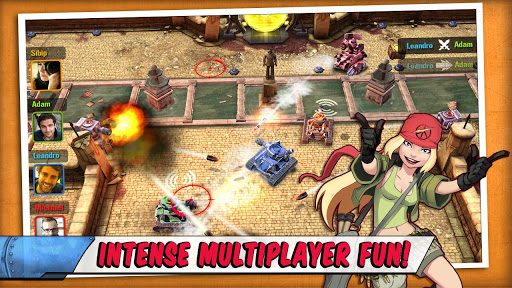 Tank Battles Description: Get ready for Tank Battles! This is General McTankerson, the greatest tank commander in the world, speaking! Many have come to my island for the Tank Battles Tournament, but only one can be crowned the Tank King. Will it be you? Roll out and let the Tank Battles begin!

Customize your tank, enter the battlefield and destroy your opponents! Tank Battles delivers one of the most exciting multiplayer experiences ever, as well as challenging solo missions – for FREE! The tanks are fast and easy to maneuver, so you’ll become a master tank commander in no time!

√ PIMP YOUR RIDE: Customize your tank with more than 90,000 combinations of cannons, armor, treads, camouflage and more.
√ RULE THE BATTLEFIELD with 22 powerful items, such as mines, turrets and bombs, to deal massive damage to opponents!
√ TEAM UP! Ally with your friends, or challenge them in epic battles while climbing the weekly and lifetime leaderboards.
√ INSANE FUN! The 80+ single-player levels & 10 multiplayer maps have been designed to offer maximum fun, with destroyable blocks, moving obstacles, closing doors, conveyor belts and so much more.

*** Warning: Tank Battles is extremely addictive. Gameloft will not be held responsible for any acts of tank-related mischief committed by players. ***

This app allows you to purchase virtual items within the app and may contain third-party advertisements that may redirect you to a third-party site.