Zombie Gunner (com.gamevil.zombiegunner.global): Blood-Splattering Action Fun! A zombie infection has spread throughout the town. Hundreds of citizens now roam the streets, hungry for flesh. Amidst ... Read More > or Download Now > 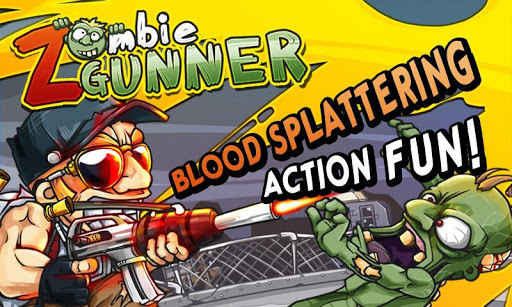 A zombie infection has spread throughout the town. Hundreds of citizens now roam the streets, hungry for flesh. Amidst the chaos, Andrew has lost his daughter, Lisa! Help him rescue civilians and find his daughter while solving the mystery behind the strange zombie appearances!

Filled with explosive zombie-killing gameplay and a storyline with twists and turns, players won’t be able to put the game down!

Simple yet so satisfying gameplay with easy controls and nonstop action will have you glued to your screen!

ENDLESS VARIATIONS OF WEAPONS AND MACHINES

Choose from a wide collection of weapons you’ll use to zap, burn or explode zombie guts! Bazookas? Flam throwers? We got it.

Along the way, you’ll meet a strange cast of characters. Add them to help you in each quest and eventually find Lisa!

Clear new stages with different challenges that are time based, technique based and so much more! Defeat bosses and unravel the mystery of the zombie invasion!