Electro Girl (Card Battle) (com.ggee.vividruntime.gg_1655): Collect, Enhance, and Evolve your Androids to be the best Architect you can be! This wonderful fantasy Collectable Card Game is open and ready to ... Read More > or Download Now > 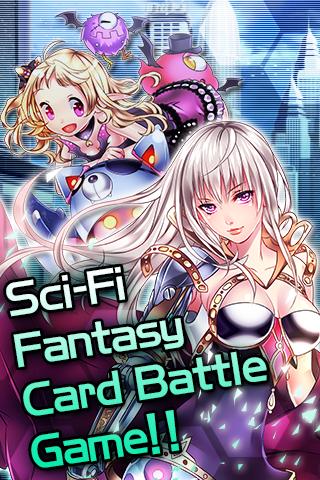 Electro Girl (Card Battle) Description: Collect, Enhance, and Evolve your Androids to be the best Architect you can be!
This wonderful fantasy Collectable Card Game is open and ready to boot!

Play through the in depth story and try to get to the Empire!
Invite your friends and create a Team to work together!
Slay powerful bosses and get wonderful rewards!
Make an awesome and gorgeous Deck of Androids!

Detailed Artwork varied between the three races of Androids!
Thousands of Cards to work with and Evolve!

Events and Quests are Updated Frequently!

In a distant city of Electro, years into the future,
The world has transformed into a realm where
Technology far surpasses our generation, resulting
in an overwhelming amount of Androids.

Electro is split between the Empire, abound in wealth
and glory, and the Underground (Under) wrought with
dank and dark conditions. The only way to leave the
Underground is to battle in the Coliseum, and it can be seen
that nightly battles are indeed rough, with imminent
destruction at every turn.

As an architect with little to no Qualia (money) in the Underground,
your days were dark and dim… until you encountered a dazzling Android
known as Neo. She also wants to reach the Empire, and so your journey
begins!

Game Contents:
Collect Android Cards and create Decks to quest through areas and battle with other Architects. Enhance and Evolve your Androids to ensure your chance at reaching the Empire! Quest through areas in the Underworld, fight bosses, and do your best to assemble the best Android team you can!