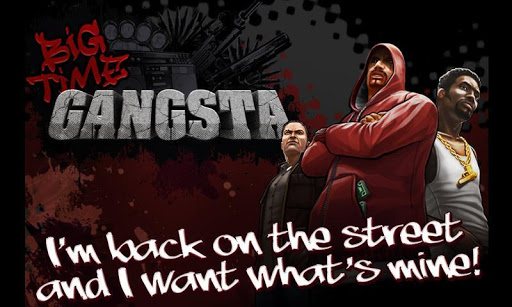 The streets of Mission Hill are as deadly as it gets. Build up your gang from the toughest bunch of STREET SOLDIERS, ex-cons and wanted crooks roaming the blocks. To survive and thrive in these dangerous neighborhoods you need to TAKE OUT RIVAL GANGS before they get to you first. HUSTLING and dealing, SHOOTING and stealing is the only way to take these streets, earn COLD HARD CASH and OWN THE CITY

OWN THE ENTIRE CITY
Take over the whole city, building by building, block by block, street by street

ARSENAL OF DEADLY FIREARMS
Arm your gang with some of the most lethal weapons on the streets, from handguns and magnums to powerful machine guns

OPENFEINT ACHIEVEMENTS
Being Big Time doesn't mean anything if your rivals are even bigger. Show them who’s boss by earning Gangsta achievements

BIG TIME GANGSTA is free to play, but you can choose to pay real money for some extra items.