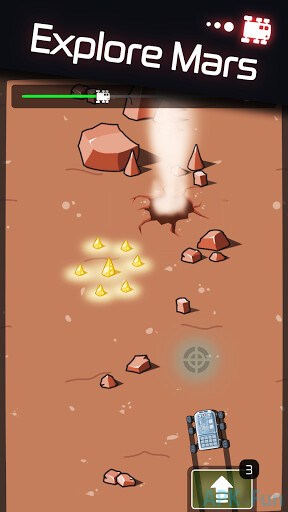 Mars Rover Description: 🌕 Become a racer of the mars rover and space cars, launch your dream of conquering Mars and solar system planets in our top down racing. Space race and overcoming obstacles are waiting for you!

Join the space exploration team - "Solar 2033" in our 2d space racing game and your space odyssey will be the most incredible.

🚀 You are the operator of space explorer in our space team and are at the control screen of the mars explorer you are driving. An incredible space program is in your hands! Explore the surface of mars and other planets!

The feeling of all this is like you are a lunar racer. This is a space game, where the fight is with a dangerous planet and not with other racers.

Launch your rocket with space rover in the vast cosmos and reach new frontier in this space exploration mission.

Join the space exploration team, and with your space team, select the best space car and start this amazing adventure of and explore the surface of the planets of the solar system.

Our space game was inspired by such space NASA programs and space team as "Curiosity Rover", "Mars Perseverance Rover".

Features:
⚡ Missions to four planets - Mars, Venus, Moon and Jupiter icy moon.
⚡ More than 100 levels for space exploration.
⚡ Many space cars and rovers - flying, fast, military and many others.
⚡ Weather effects.
⚡ Day and Night Cycle.
⚡ Space Explorer Upgrade System - upgrade your shield, batteries, power units and more.
⚡ Control with one hand and one finger.
⚡ Works without Wi-Fi and internet, like many offline games.
⚡ Amazing Space Exploration and Space Odyssey!

- The game now starts with missions to Mars.
- Completing a level now unlocks the next two levels at once instead of one.