Rage of the Immortals for Android

More About Rage of the Immortals Game 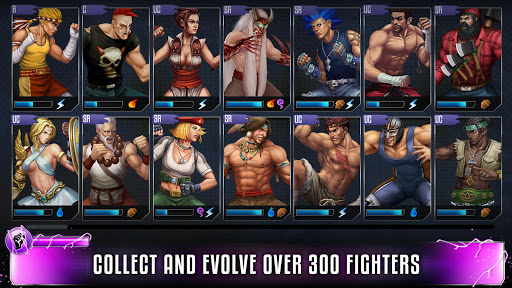 Rage of the Immortals Description: Create a super powered team of fighters from all over the world and get ready for battle in Rage of the Immortals, a free fast-paced action game. With over 190 characters to unlock and recruit on your journey, you can create the ultimate dream team of fighters to take on epic bosses, challenge players from around the world in weekly PvP tournaments and fight through over 20 different combat zones.

HUGE ROSTERUnlock over 190 exclusive fighters with their own unique style and design. Intercept armored trucks to rescue rare fighters. Challenge and defeat epic bosses to recruit them to your team.

WORLDWIDE BATTLESTest your strength against players around the globe in weekly PvP tournaments. Do you have what it takes to fight your way to the top?

CUTTING-EDGE TEAM MANAGEMENTChoose & manage a team of fighters. Train and combine them to increase their abilities to create a powerful team that crushes the competition.

GRIPPING STORYComplete 100's of different quests to unravel the story of Rage of the Immortals. Explore, unlock and beat 35 areas with five different difficulty levels.

EASY TO LEARN, CHALLENGING TO MASTERJump into gameplay with intuitive gesture-based controls as you master the secrets of training and evolving your fighters.

WIDE RANGE OF DEVICE SUPPORTRage of the Immortals is optimized for a broad range of tablets and phones from the Nexus 7 to the Samsung Galaxy Note. Play it on virtually anything that's version 2.3 or above!