Jetpack Doodle Man (com.jetpackdoodleman.app): Do you prefer games with stick figures and doodle art backgrounds but still like the nonstop action and awesome heart-pounding thrills of more ... Read More > or Download Now > 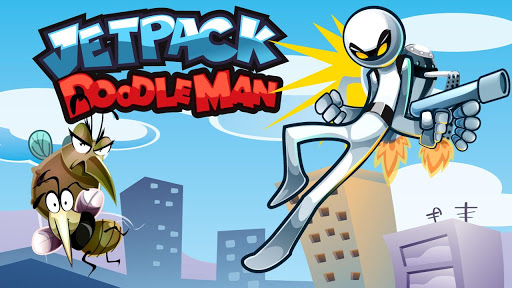 Jetpack Doodle Man Description: Do you prefer games with stick figures and doodle art backgrounds but still like the nonstop action and awesome heart-pounding thrills of more intense game genres? Check out Jetpack Doodle Man, one of the coolest new family games from Free Action Games Plus Fun Apps!
In this popular, addicting game, you play none other then Jetpack Doodle Man himself, an unlikely hero stickman representing a futuristic army in the skies over this crazy cartoon city.
Far from a routine Sunday soar, in this app you find yourself in Angry Mosquito World, with obstacles and enemies galore. Watch out as oncoming plagues of mosquitoes of all sizes loom at you like a dark cloud in the sky - large mosquitoes, small angry mosquitoes, and tiny mosquitoes – all ready to pierce your thin space suit with their hungry proboscises and drain out your life.
As if that wasn’t enough danger for one zany game, the skies of this futuristic city are also full of the precarious exploding sky mines, hurtling at your helmet out of nowhere and threatening to blast you from the skyline and send you tumbling to the city streets below. Test your reflexes as you scramble from their path as fast as possible, avoiding wipeouts if you can.
Jetpack Doodle Man comes armed and ready for the challenge, shooting the angry enemies in this mosquito world out of the air with a deadly fireball blaster as he moves onward.
But while staying alive is hard enough in this one-dimensional world, the real point of the game is to collect as many gold and silver coins as possible as the game progressively picks up speed, bringing new obstacles at you faster and faster. That you crash and burn is inevitable, but how long will your run last and how many points can you rack up before getting smashed to the ground?
One of the top free games hitting the market and a great choice for both kids and adults looking for fun, addictive games involving stick figures that they can play on their mobile phones, it comes compatible with Android.
It’s also fully supported by Game Center, allowing you to share your score with your friends and rub in your flying prowess and deadly gun skills.
Are you ready to blast some mutant mosquitoes?