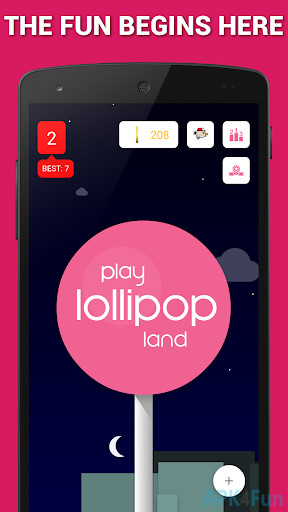 Lollipop Land Description: Fly Bugdroid and his friends through the Android dessert forest, through the sea of swirly twirly lollipops. Jump your way through this delicious lollipop land.

Lollipop Land is a fun game based off the Android 5.0 Easter Egg. 🍭

Android 5.0 Lollipop is the biggest update of Android to date. Like previous versions of Android, there is a hidden Easter egg in Settings ➙ About phone. If you tap rapidly on Android version your Easter egg will appear.

The Easter egg, created by Google, was undoubtedly inspired by the 2014 hit game Flappy Bird. 🐦 Instead of the bird, your player is the Android mascot (Bugdroid). Instead of retro-themed pipes, the barriers are Lollipops. When you click the screen you automatically go into game-play. The object of the game is to pass through each Lollipop barrier by tapping on the screen to keep Bugdroid from hitting the ground.

This game gives you early access to the Easter egg. It also adds tons of fun features. Download, install, and share this free and unique game.