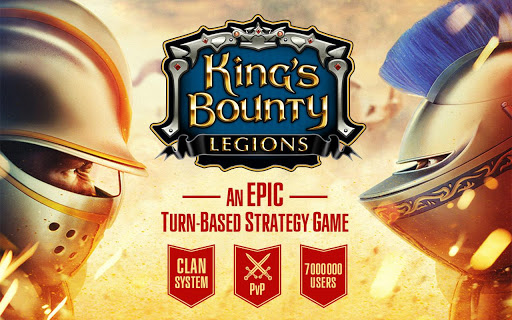 King's Bounty: Legions Description: Save worlds and fight alongside friends in one of the finest strategy games!

One of the world's best and most popular strategy games is now on Android! Remarkable 3D graphics allow the player to immerse into their beloved King's Bounty universe with the same depth as the series' original games, and wage battle against their friends in PvP for the first time.

Game Features and Elements:
★ Extraordinary 3D graphics;
★ Many locations, captivating quests;
★ Play with hundreds of thousands of players from all over the world, invite your friends;
★ Choose the strongest soldiers and the best gear;
★ One account for Android and Facebook – play your favorite game both on Android devices and on your computer;
★ Assemble an invincible army and crush your enemies in PvP battles;
★ Take part in tournaments, unite in clans and discuss strategy in an online chat.


Defeat everyone in King’s Bounty: Legions!

New:
Meet the Inferno army! New units can be purchased in the Royal Shop or obtained from the sets of creatures
Devilry Folios, used to upgrade the Inferno creatures, were added. You can get them while on patrol, find in treasure chests or buy in the Royal Shop. Also, the Inferno creatures can be upgraded in exchange for crystals
Silver Regalia of Resilience can now be crafted
Fixes:
The description of the Commander’s License was edited
Patrol is not possible in Knights’ Academy