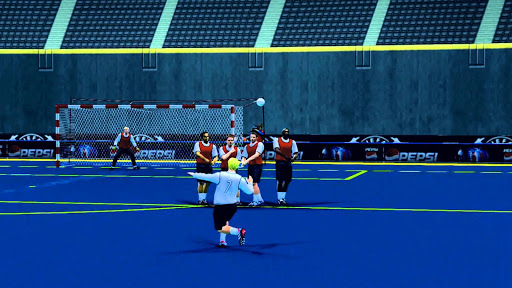 Futsal is a variant of football that is played on a smaller field and mainly played indoors. Its name comes from the Portuguese futebol de sal?o, which can be translated as "hall football". During the sport's second world championships held in Madrid in 1985, the Spanish name fútbol sala was used. Since then, all other names have been officially and internationally changed to futsal. It was developed in Brazil and Uruguay in the 1930s and 1940s. In Brazil futsal is played by more people than football but does not attract as many spectators as the outdoor sport. Several futsal players have moved on to careers as successful professional football players. indoor football，Futsal，five-a-side football，indoor soccer，Futsal game

Play a fun game of the best football game experience on your device. You can also keep the performance of your games (goals, fouls, yellow and red) and then you can share the results with anyone.

Futsal is a game played between two teams of five players each, one of whom is the goalkeeper. Unlimited substitutions are permitted. Unlike some other forms of indoor football, the game is played on a hard court surface delimited by lines; walls or boards are not used. Futsal is also played with a smaller ball with less bounce than a regular football due to the surface of the pitch.The surface, ball and rules create an emphasis on improvisation, creativity and technique as well as ball control and passing in small spaces.

To bring you new and exciting gaming experience !Hands and brain , come up with enough courage and strength ! Come and get the final victory it !

Come into the world of football,Fun!