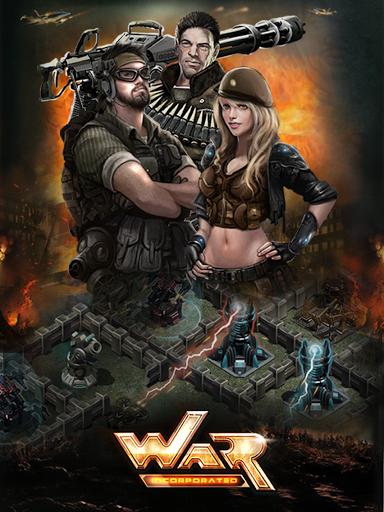 War Inc: Nations Fury Description: War Inc. is a modern combat military game of skill and world domination! Command your army to glory in this epic war game! Deploy powerful towers, create an advanced military force, and conquer your enemies as you clash in battle against thousands of players!

In War Inc., you build an army of fast-paced modern Marines and Snipers, and command heavy Mechs, Scorpion Tanks, and Walkers to reduce your enemy's base to rubble! Do you have what it takes to conquer the War Corp ranks and rise to glory as you battle against your foes?

★ MEGA ALLIANCE BASE: Build and upgrade a powerful alliance sector with your allies!

★ ADVANCED UPGRADE SYSTEM: Turn your Command Center into an unbreakable fortress and unlock powerful researches to build an unstoppable force!

★ GRIPPING SINGLE-PLAYER CAMPAIGN: Fight through hundreds of missions against the Rebellion!

__________________________________
-THE WAR CORP STORY-
The year is 2085. In the wake of World War 3, leading governments have crumbled in the face of annihilation and a new power has emerged known only as the War Corp. To expand its power, conquer territory, and maintain order, the Corp inducts and trains the world's most skilled and powerful commanders, giving them command of its outposts.

Global currency has now been replaced by Saphrite, a rare mineral, and oil has become an impacted resource with major battles being fought over control of the world's depleted reserves. As an Independent Military Contractor, you have just been recruited by the Corp…