Super Battle Tactics (com.mobage.ww.a1933.Super_Battle_Tactics_Android): Feel the ground quake and hear the crowds roar as everyone prepares for the main event! We’re live on ‘Tank TV’ where bold tactics and artful ... Read More > or Download Now > 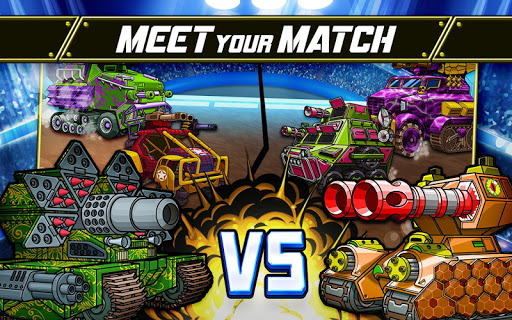 FEATURES
● Real-Time PVP: Gather your friends, form a Club, takedown other Clubs from around the world, and share the glory
● Whopping War Machines: Contest for coveted machine parts to build a competition-crushing team of tanks
● Swift Showdowns: Bring out your best tanks and takedown your competition in fast-paced head-to-head battles
● High Risk Choices: Select your targets, time your re-rolls, and unleash strategic attacks to clinch your victory
● Extreme FX: Each battle is packed with big explosions and booming sound effects that will get your adrenaline pumping
● Compete in Live Events: Earn legendary rewards and prizes for taking first place on the league leaderboards
● Get Sponsored: Accept endorsement contacts from Sponsors for a chance at extremely rare parts and tanks
Here on Tank TV it's all about The Fans!!! Thanks for all your feedback and reviews! We're constantly working to make this game even more awesome and have really exciting features planned throughout the year.