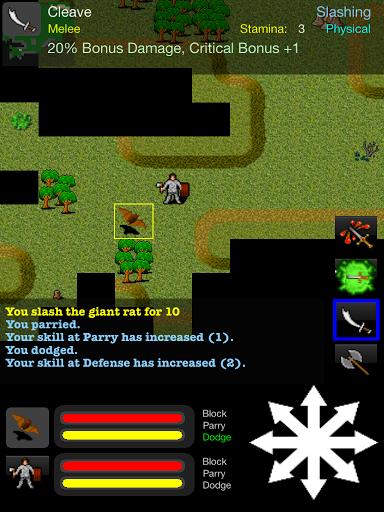 Endless Nights RPG Free Description: Endless Nights is a role-playing game in the rogue-like tradition, which means randomized adventure areas, random dungeons and a different adventure each time you play the game. Endless Nights lets you play **your** way, with a skills-based system that recognizes the actions of your character in the game and develops those skills. This means you can choose to use a sword, or a mace, use magic or pray to the gods, and you never need worry about picking a class and no visiting trainers to 'learn' new skills.

This free version is a fully-functional version of the game. The only thing missing is the ability to choose the Races profile, which allows you to play races other than human. The premium version allows you to choose different races and takes away the in-game advertising.

* A rogue-like RPG with random quests, random dungeons and a new adventure each time you play.
* Over 100 different abilities to learn in the skills-based system.
* Strategic turn-based combat.
* Profiles let you choose a different way to play the game.
* Themed monster areas will have you clearing woods of spiders and taking out a group of kobolds.
* A crafting system that includes magical manastones that can be found or rewarded by quests.

Endless Nights is similar to RPG classics like Rogue, Moria, Omega, Angband and Diablo with a level of challenge similar to Demon's Souls and Dark Souls.

CREDIT: The public domain tilesets used in Endless Nights come from the RLTiles collection. Some of the sounds used come from www.freesfx.co.uk, including sounds by qudobup, and the font used for the Endless Nights logo was created by fontmesa at fontspace.com.

Fixed possible issue where the game wouldn't resume properly on some Android devices. Hopefully this solves it for all devices and instances.