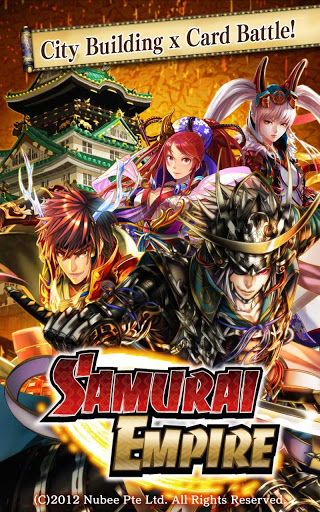 In two weeks after the release of Samurai Empire in Japan.★ Ranked No. 1 in Game Rankings☆ Ranked No.2 in Overall Rankings★ Ranked No.1 in Card Rankings

【KEY FEATURES】■ Build your very own Japan Feudal Era Town!! Collect resources from your Town to hire Troops! Get buildings from rewards or Login Bonuses to place in your Town!

■ Conquer the Battle Field!  Hundreds of Samurai to collect!  Collect Treasures from Battle/Duel and Obtain Powerful Samurai!  Form a powerful army and send them to the Battle Field! ”Fusion” & ”Evolve” Samurai to show their true powers! Build a that will support you with 60 warriors on top of your ATK Deck ・DEF Deck!

■ RIVAL RAID Arrives! Highlight of the game “Rival Raid”  Be prepared to encounter Rival Raid in the midst of battle!  Get Rewarded and build a powerful Deck! ■ Form a Guild and unify the Empire! Join forces with Guild members and face epic battles. ■ Interact with fellow players  Form allies with fellow players in Forum and Subjugate Rival Raid!

【GAME REQUIREMENTS 】■ Internet connection is required.■ Android 2.3 or above is required.

※Samurai Empire is an online game and Internet connection is required to play. ※Samurai Empire is a free-to-play game. However, to purchase of in-game items, you must have in-app billing set up. ================ABOUT NUBEE================Thank you for your support! We strive to make updates on a constant basis.We are open to all suggestions and feedback from everyone!Send your feedback to support@nubee.com.We implore your kind understanding that we may not be able to reply to all your messages.

Follow us on Twitter!@NubeeSG"LIKE" Samurai Empire on Facebook!https://www.facebook.com/pages/Samurai-Empire/348979015184421Get the latest updates from our official site!http://nubee.com