Hero Siege (com.panicartstudios.herosiege): INFO- This game is recommended to be played on a TABLET using a MOGA controller or NVIDIA SHIELD. This is not designed for small phones or touch ... Read More > or Download Now > 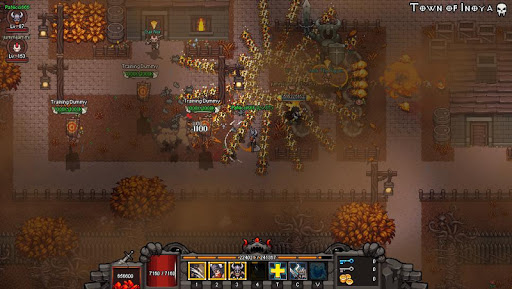 Hero Siege Description: INFO
- This game is recommended to be played on a TABLET using a MOGA controller or NVIDIA SHIELD. This is not designed for small phones or touch controlls!
- Multiplayer works best in Wi-Fi / 4G
- Hosting a game requires portforwarding for the port 6510
- The game is very heavy, older devices will have terrible FPS
- Get the game on STEAM if you want to really enjoy it

The kingdom of Tarethiel has been taken over by creatures of hell. Your mission is to cleanse the kingdom and free the citizen from the agonizing wrath of the demon child called Damien. Grab your axe, bow, gun or magic powers and start purging the Gate Keepers and their minions!

The gaming experience is boosted with Haptic Effects by Immersion!

FEATURES:
- Randomly generated levels, items, dungeons, bosses, secrets and events. Every game session you play is different!
- Over 100 unique crafted items that are either passive, usable or orbiting.
- Over 40 different enemies with the possibility to spawn as rare or elite with extra hp/damage and abilities, but dropping better loot and giving more exp!
- Over 50 Achievements to unlock!
- Many different perks to unlock!
- Customize your character!
- 3 Acts which all consist of 5 zones + lots of randomly generated dungeons!
- 3+ unlockable classes!
- 3 different difficulty levels to unlock!
- Tons of random! Start discovering all the wonderful secrets and content!
- Haptic Effects
- MOGA controller support
- NVIDIA Shield support

Strong inspiration from games such as: Diablo -series, Binding of Isaac, Zelda -series, Minishcap, Every awesome roguelike game out there!