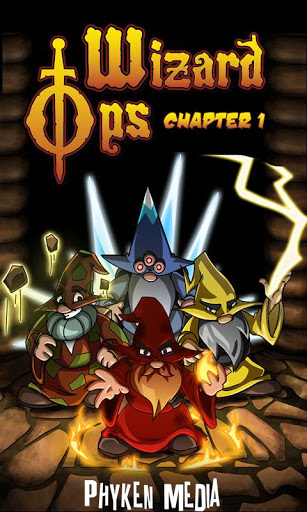 Wizard Ops begins a multi-episodic arc following a team of commando wizards, known as the Wizard Ops, who once protected a magical kingdom from constant danger. However, after the Queen dies in a horrific accident, the King blames the Wizard Ops and imprisons them. This allows an evil being, known as the Mad Maker, to gain control of the kingdom by kidnapping and holding the Princess for ransom. Having no other choice, the King must rely on the Wizard Ops once again.

This is Chapter 1 of an epic adventure which starts as you control the Fire Wizard in a fast paced, non-stop action game! With over 18 weapons at your disposal earned and purchased in the Game’s shop you’ll be mowing down the forces of the Mad Maker in no time!

FIXES & UPDATES for more Recent Android Devices, which are using OS 4.0 and above.
PHYKEN MEDIA DIrect Line - Contact the developers directly, lets us know what you like or don't and send along ideas which will all be individually read.