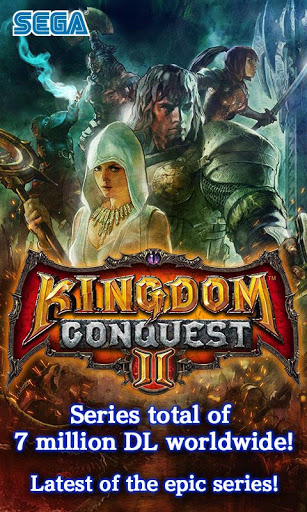 It is a time of war and chaos. Begin with nothing and end with a kingdom. SEGA’s Kingdom Conquest II is the epic free-to-play strategy game for conquerors.
Dominate real players online. Unite the strong and crush the weak until final victory is declared. You decide who joins your cause or submits to your will. Kingdom Conquest II blends the best elements of card battling, real time strategy, MMORPGs, and 3D dungeon battles to deliver a massive and addictive fantasy war game like no other.
=FEATURES=
- FREE TO PLAY
- DOMINATE ONLINE. Plot, plan, and attack with your allies to conquer the Nine Towers of Magna.
Forge a gorgeous 3D rendered fortress to create a mighty army from hundreds of monster cards.
- WIELD CARD AND CITY BUILDING SKILLS. Build a gorgeous 3D rendered fortress to create a mighty army from hundreds of monster cards.
- SURVIVE 4-PLAYER CO-OP DUNGEON BATTLES. Slay waves of dark fantasy creatures and boss monsters in real-time. Be rewarded with rare items and monster cards.
- RAISE AND COMMAND A FANTASY ARMY.
Collect and combine hundreds of monster cards and strategically deploy them into massive turn-based battles.
- MASTER NEW CHARACTERS AND SKILLS. New avatars: Swordsmen, Warrior, Mage, Monk and Ninja. New Monster cards to file your ranks, and new Commanders to deepen your battle tactics.
Kingdom Conquest II is completely free to play, however some game items can also be purchased with real money.
Note: A network connection is required to play
Customer Service:
Having any problems? Any suggestions? We would love to hear from you! You can reach us at:
http://help.kingdomconquest.com