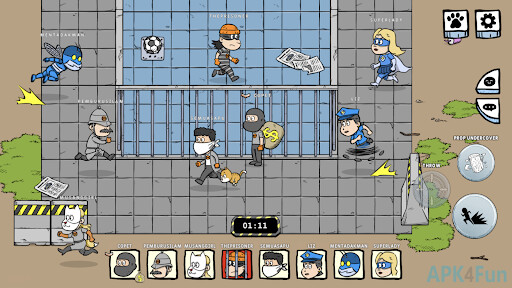 Police Sentri Description: Play online in a fun, quick, high-adrenaline multiplayer chasing game. Taking inspiration from the familiar childhood game of cops and robbers and hide and seek, players will be assigned as either a police or a robber.

PLAY TO WIN
Catch all robbers to win the game as a police or hold the ‘money bag’ while evading the police until the timer runs out to win as a robber. Robbers can rescue their friends to escape from the jail and increase the chance to win the game. Police will have to patrol the jail in order to avoid jailbreak!

RANDOM POWERUPS
Collect various items in the level such as banana peel, disguise, lock-pick, cabbage, and exploding kitten to aid you in evading and catching or just to create havoc while having fun.

LEVEL UP
Robbers can rank up by rescuing their comrade from prison. Police can rank up by catching a ‘ranked up’ robber. Higher ranks will give a speed increase.

Up to 10 players can join the fun in an online game session. Play cross-platform with friends and family in this 2D top-down game.

Police Sentri is now TAG Police Sentri. Enjoy the multiplayer experience of cops and robbers with this Christmas update