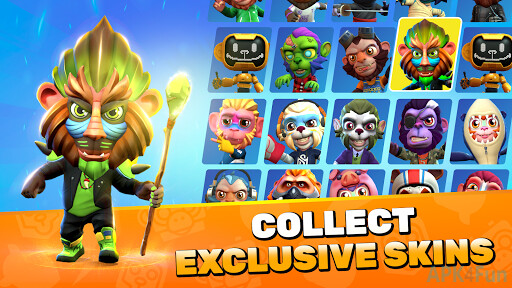 Smash Monkeys Description: Hurry up to be the first! 🏁🙉💥

Immerse yourself in an epic race full of obstacles and test your reflexes while competing with other players. Explore different worlds, perform spectacular maneuvers, use powerful objects to smash your friends and get to the finish line first!

Each year the most important event is celebrated, the 🏆 Smash Race 🏆, a race where the most powerful Smashers in the world compete to be the best while facing other competitors. A demonstration of strength, speed and agility where there can only be one champion. 🥇 🐵 🥇

Join our 💪 Smashers and dash the progress of your rivals up to the finish line to win incredible rewards.

The protagonists of the races are the Smashers, they look like a friendly pet, but be careful when their animal instincts take over them. Discover the huge diversity of Smashers that exists in the world of Smash Monkeys!

Find the one that defines you the most and customize it with the different available skins to win the brawl: shark, mummy, samurai... and many more! In addition, you can equip your character with different animations at the beginning and end of the races.

🍌Bananarang: throw it and hit, but beware! It comes back like a boomerang!
⚡ Lightning: stuns all competitors from any position.
🧲 Hook: help yourself to climb or drag your rival with this object
💣Bombonut: destroy and stun your rivals with this coconut bomb.
🌎Gravity Amplifier: All the opponents are suddenly pushed down to the ground. Additionally, they experience increased gravity.
⭐Star: use this object to get a temporary sprint.
🤜Fist: stun your rivals with this super punch with momentum.
🚀Rocket: jump on it and leave your rivals behind, drives automatically.
👽UFO: absorbs the rival in the first position and all those who try to cross it.
💥 Missile: a homing missile that chases the player just in front.
🔫 Jelly Gun: Shoot a jelly cube to trap your opponents.

🏙City: Break cars, climb buildings, glide on treacherous zip lines and use shortcuts such as pipe systems and sewers to cross the finish line first. Careful with the subway!

⛰Jungle: Your mission is to escape from the temple of doom. Use the rain forest vines and wooden ramps to speed up your pace, rush through the woodland and be wary of the spike traps if you wouldn’t want to get stuck in…forever.

🏜Pyramids: Try not to get crushed by the giant rolling stones, move between passages, don't let the quicksand stop you, and be very careful where you step, because you can activate secret traps and end up in a sarcophagus.

🌃Cyberpunk: Escape the moving lasers, switch the traps to avoid being splashed by the shuttle, and make your way through the conveyor belts in these neon electric-cities where technology will take the best of you.

🌋Volcano: Let the adventure begin in this world full of dragons, lava lakes, and much more. Don’t let anyone cross your way and sprint as fast as you can if you don’t want to disappear in the flames.

Smash Monkeys is a take on parkour battles in a world of action and adventure that you cannot miss. You’ll have fun! 🎉

★ More than 10 worlds
★ New game modes: team duel, race against time and much more!
★ Competitive system: climb the leaderboards and challenge the best players in the world!

Stay tuned for upcoming updates. Follow us on social media:

● We've a new Season Pass introducing a new legendary Smasher: Licia 😈
● We've improved the performance of the game ⚡
● We've revised the gameplay of the Smash Race mode to bring back the frantic pace 🐒
● We've fixed minor bugs and improved stability 👾